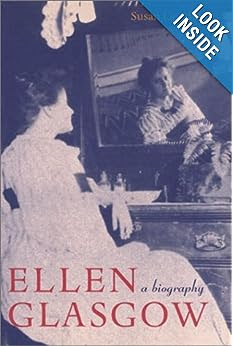 * Family testimony reveals that Ellen Glasgow was born "precisely at four o'clock in the morning." The first degree of Aries was rising, with Mars in Scorpio ruling from the 8th in a Fixed Grand Cross. My favourite Glasgow quote: “The only difference between a rut and a grave are the dimensions.”

Ellen Anderson Gholson Glasgow (April 22, 1873 - November 21, 1945) was an American novelist who portrayed the changing world of the contemporary south.

As the United States women's suffrage movement was developing in the early 1900s, Glasgow marched in the English suffrage parades in the spring 1909. Later she spoke at the first suffrage meeting in Virginia. Glasgow felt that the movement came "at the wrong moment" for her, and her participation and interest waned. Glasgow did not at first make women’s roles her major theme, and she was slow to place heroines rather than heroes at the centers of her stories. Her later works, however, have heroines who display many of the attributes of women involved in the political movement.

In 1941 she published In This Our Life, which won the Pulitzer Prize for the Novel in 1942. In addition, it was quickly bought by Warner Brothers and adapted as a movie by the same name, released in 1942.

Her autobiography, The Woman Within, published after her death, details her progression as an author and the influences essential for her becoming an acclaimed Southern woman writer.

BIRTH DATA: Ellen Anderson Gholson Glasgow, 22 April 1873, 04:00 (4 a.m.) LMT (+5:09:51), Richmond, Virginia, USA (37n33, 77w27). ASC: 00 Aries. RR: A (from family testimony). SOURCE: Sy Scholfield (c) quotes Ellen Glasgow, "The Woman Within (New York: Harcourt Brace, 1954), p. 5: "There has always been a confusion, or simple inaccuracy, concerning the hour and date of my birth. All through my childhood Mother celebrated my birthday on the 22nd of April. I still accept her authority, though I discovered a few years ago, when we consulted the old family Bible, which is now in the possession of my sister, Rebe Tutwiler, that Father had recorded the unhappy event as occurring on April 21st. As I came into the world precisely at four o'clock in the morning, by the testimony of all concerned, I suppose Father had considered it was still night, while Mother, a more sanguine spirit, who welcomed ten children with joy, had dreamed of the more confident morning. But we still made another discovery in the Bible adventure. It appeared, by the record in faded ink, that I was born, not in 1874, as I had always assumed, but in 1873. Many years ago, in filling in a first slip for Who's Who, my sister Cary must have, inadvertently, counted back from January, instead of April."