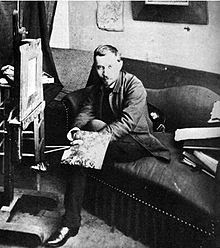 * Charles Filiger ― Post-Impressionist painter of mystical subjects ― had retrograde Neptune in Aries closely aspecting his luminaries. He drugged himself on ether and died an alcoholic.

Charles Filiger (28 November 1863, Thann – 11 January 1928, Brest) was a French Symbolist painter. He was one of the artists who associated with Gauguin at Pont-Aven in Brittany.

André Breton who bought several of Filiger's works considered him to be a surrealist, not strictly within the Pont-Aven school. Nor did Emile Bernard see him as a disciple of Gauguin, characterizing him as a mixture of Byzantine and Breton popular art forms. In Pont-Aven he remained a mystic and a recluse. The area provided fertile ground for his mystical imigary. Indeed, his geometric approach and expressionless faces in subjects such as Virgin and Child (1892) show his interest in early Italian painting and the Italian tradition. His landscapes, for example Breton Shore, reflect Gauguin's abstract quality and simplification. Jan Verkade, who met him in Le Pouldu commented: "He produced very little but I have seen some very beautiful gouaches of his; they are mainly religious paintings, reminiscent of Byzantine and primitive Italian works, but quite personal and quite modern.

He had sociable Libra rising but with Saturn at the very very end of the 12th, Filiger remained a mystic and a recluse.