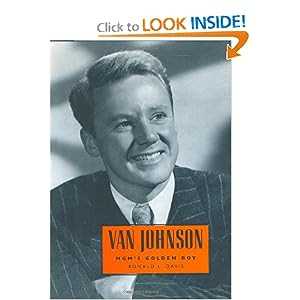 Van Johnson (August 25, 1916 – December 12, 2008) was an American film and television actor and dancer who was a major star at Metro-Goldwyn-Mayer studios during and after World War II.

Johnson was the embodiment of the "boy-next-door wholesomeness (that) made him a popular Hollywood star in the '40s and '50s," playing "the red-haired, freckle-faced soldier, sailor or bomber pilot who used to live down the street" in MGM movies during the war years with such films as Thirty Seconds Over Tokyo, A Guy Named Joe and The Caine Mutiny. Johnson made occasional World War II movies through the end of the 1960s, and he played a military officer in one of his final feature films, in 1992. At the time of his death in December 2008, he was one of the last surviving matinee idols of Hollywood's "golden age."