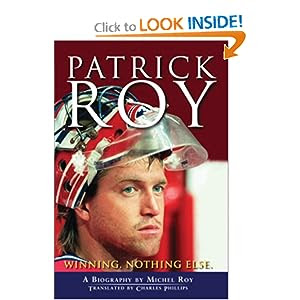 Patrick Jacques Roy (born October 5, 1965) is a former Canadian ice hockey goaltender. Nicknamed "Saint Patrick," Roy split his professional career between the Montreal Canadiens, whom he played with for 10 years, and Colorado Avalanche, whom he played with for 8 years, both of the National Hockey League. Roy won two Stanley Cups with each franchise. In 2004, Roy was selected as the greatest goaltender in NHL history by a panel of 41 writers, coupled with a simultaneous fan poll. On November 13, 2006, Roy was inducted into the Hockey Hall of Fame.[4] He is the only player in NHL history to win the Conn Smythe Trophy (the award given to the most valuable player in the Stanley Cup playoffs) 3 times and also in different decades. Roy is widely credited with popularising the butterfly style of goaltending, which has since become associated with goalies from Roy's native Quebec. Roy's #33 is retired by the Canadiens and Avalanche. He is currently the co-owner, general manager, and head coach of the Quebec Remparts of the Quebec Major Junior Hockey League.

Uranus-Pluto in Virgo on the MC looks good for goaltending, as does Mars rising ruled by an unaspected Jupiter in the 8th House. Very defensive!