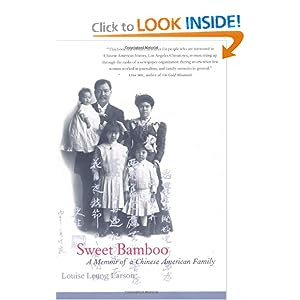 Sweet Bamboo is the vivid and absorbing memoir of a Chinese American family who lived in Los Angeles since the first years of the twentieth century. Lovingly recounted by the second daughter, Louise Leung Larson, who went on to become the first Asian American reporter for a major American newspaper, this account illuminates the many changes that occurred in the family as members increasingly became integrated into American society. While much of the attention given to Chinese immigrants has focused on the struggles of working class people, this book sheds new light on a different kind of immigrant experience--that of privileged Chinese parents and their children living in relative affluence in a predominantly white neighborhood.

Lots of Cancerian Moon folk revel in researching and writing up their family histories. Larson has channelled her Cancer Moon -- via a quincunx with Mercury in Aquarius on her Ascendant -- into the book, Sweet Bamboo, a vivid and absorbing memoir of her Chinese American family resident in Los Angeles since the first years of the twentieth century.