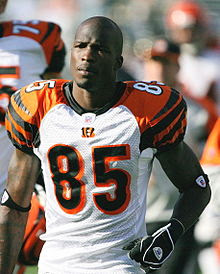 * Chad Johnson, formerly Chad Ochocinco, is a former American football wide receiver. He was drafted by the Cincinnati Bengals of the National Football League in the second round of the 2001 NFL Draft, and played for the Bengals for ten seasons. In 2011, Johnson was traded to the New England Patriots with whom he played in Super Bowl XLVI. In 2012, Johnson played for the Miami Dolphins during preseason but was released following his arrest for domestic violence. He played for the Montreal Alouettes of the Canadian Football League (CFL) from 2014 to 2015.

On 25 October 2006, in honour of Hispanic Heritage Month, Johnson, whose jersey number was "85", announced that he would prefer to be called "Ocho Cinco," which is "eight five" in Spanish ("Eighty-five" would be "ochenta y cinco").

In April 2011, CNBC listed the then-Ochocinco as No. 1 on its list of "Most Influential Athletes In Social Media." He currently has 3.6 million followers on Twitter. Johnson is a six-time NFL Pro Bowler, was named to four All-Pro teams, and was voted as the number one wide receiver on the Bengals 40th Anniversary team.