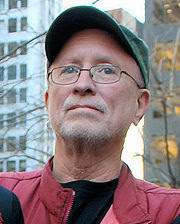 * Bill Ayers is an elementary education theorist and a former leader in the counterculture movement who opposed US involvement in the Vietnam War. He is known for his 1960s radical activism and his current work in education reform, curriculum and instruction. In 1969, he co-founded the Weather Underground, a self-described communist revolutionary group with the intent to overthrow imperialism, that conducted a campaign of bombing public buildings (including police stations, the US Capitol Building, and the Pentagon) during the 1960s and 1970s in response to US involvement in the Vietnam War.

He is a retired professor in the College of Education at the University of Illinois at Chicago, formerly holding the titles of Distinguished Professor of Education and Senior University Scholar. During the 2008 US Presidential campaign, a controversy arose over his contacts with candidate Barack Obama. He is married to Bernardine Dohrn, who was also a leader in the Weather Underground. They have two sons, Zayd and Malik and they also raised Chesa Boudin.

BIRTH DATA: William Charles Ayers, 26 December 1944, 00:10 (12:10 AM) CWT (+5), Oak Park, Illinois, USA (41n53, 87w47). ASC: About 25 Virgo. RR: B (Autobiography). SOURCE: Sy Scholfield quotes him relating the story of his birth in Fugitive Days: Memoirs of an Antiwar Activist by William Ayers (Beacon Press, 2009), p. 9: "while [my parents] drove off to Oak Park Hospital . . . I missed [being born on] Christmas by minutes, but that never diminished the intensity of this foundational myth — I was the best Christmas present ever, my life achieved against great danger and risk."