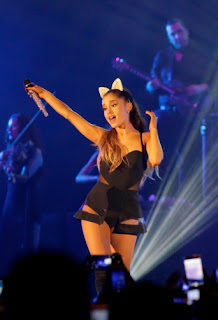 * Ariana Grande is the first person in the history of the Billboard Hot 100 chart to have the lead single from each of her first three albums debut in the top 10. She released her debut studio album Yours Truly in 2013, which debuted at number one on the US Billboard 200. The album's lead single, "The Way", reached the top-ten of the Billboard Hot 100, with critics comparing her wide vocal range to Mariah Carey's. Grande's second studio album, My Everything (2014), also reached number one in the United States and charted well in various other countries. With the singles "Problem", "Break Free", "Bang Bang" and "Love Me Harder" from that album, she spent 34 continuous weeks in the top 10 of the Billboard Hot 100 and had the most top 10 singles of any artist in 2014. In March 2016, she released "Dangerous Woman", the lead single from her upcoming third studio album of the same name. The album is set to be released in May 2016.