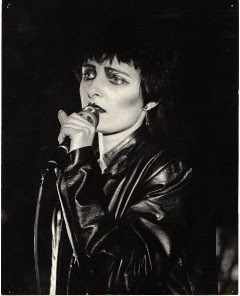 * Siouxsie Sioux (photographed at the Edinburgh Tiffany's, 1980; at left) is best known as the lead singer of rock band Siouxsie and the Banshees (1976–1996) and its side project The Creatures (1981–2005). Siouxsie and the Banshees released 11 studio albums and several UK Top 20 singles including "Hong Kong Garden", "Happy House", "Peek-a-Boo" plus a Billboard Top 25 hit "Kiss Them for Me". With The Creatures, Siouxsie recorded four studio albums and the hit single "Right Now". She has also sung with artists such as Morrissey and John Cale. In the mid-2000s, she began a solo career and released Mantaray in 2007. NATAL DATA and ASTROLOGY CHART