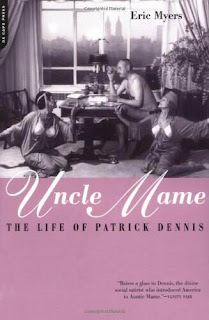 * Patrick Dennis's novel Auntie Mame: An Irreverent Escapade (1955) was one of the bestselling American books of the 20th century. In chronological vignettes, the narrator — also named Patrick — recalls his adventures growing up under the wing of his madcap aunt, Mame Dennis. Dennis wrote a sequel, Around the World with Auntie Mame, in 1958. Dennis based the character of Mame Dennis on his father's sister, Marion Tanner. He also wrote several novels under the pseudonym Virginia Rowans. All of Dennis's novels employ to some degree the traditional comic devices of masks, subterfuge and deception.

Auntie Mame was played by Rosalind Russell (in a 1956 Broadway production and in the highly successful 1958 screen adaptation), by Angela Lansbury (in Jerry Herman's 1966 musical Mame), and by Lucille Ball (in the 1974 film version).

The flamboyant and exuberant Mame's frequently repeated motto is "Life is a banquet, and most poor suckers are starving to death!" She is represented by Neptune at 11° Leo in Patrick Dennis's chart, as channelled through synastry by these starring ladies: Rosalind Russell had her MC at 14° Leo, Angela Lansbury had 21° Leo rising, and Lucille Ball had her Sun at 13° Leo.