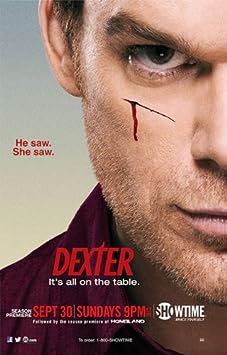 * Michael C. Hall is best known for his role as the serial-killer Dexter Morgan in the Showtime TV series Dexter. Hall has won a Golden Globe award and a Screen Actors Guild Award for this role. Previously, he played David Fisher, a young man struggling with his homosexuality while following in the footsteps of his deceased mortician-father, in the HBO drama series Six Feet Under.

Hall's Aquarian Sun and Ascendant are ruled by Uranus in the 8th: the house of death, murder, mortuaries, serial-killers and sexuality issues. Pluto also resides in this house in the last degree of analytical Virgo and in quincunx with the Ascendant. Moreover, Pluto and Neptune make a Yod with the Moon. Luna is at the apex of the Yod in bloody Aries on the cusp of the Jekyll-and-Hyde 3rd house: Dexter is a blood-spatter analyst by day, and a serial killer vigilante by night. Note also Mars on the MC ruling the Moon, and Mars and Neptune conjunct their ruler Jupiter (final dispositor of the chart) on the MC. Jupiter thus particularly exaggerates Mars and Neptune, hence all the blood and gore and all the deception about Dexter's true character (which gives the show its kick).

Hall stars in and co-produces the Showtime television series Dexter, in which he plays the eponymous character, a blood-spatter analyst for the Miami Metro Police Department who moonlights as a vigilante serial killer. The series premiered on October 1, 2006 and its eighth and final season has begun on June 30, 2013. For his work on Dexter, Hall was nominated for five more Emmy Awards for Outstanding Lead Actor in a Drama Series, in 2008, 2009, 2010, 2011 and 2012. The show itself was also nominated for a 2008, 2009, 2010, 2011 and 2012 Emmy in the Drama Series category. He won the 2007 Television Critics Association Award for Individual Achievement in Drama. Hall was nominated for the Golden Globe Award for Best Performance by an Actor in a TV Drama in 2007, and again in 2008, finally winning the award at the 67th Golden Globe Awards in 2010. Also in 2010, he won a Screen Actors Guild Award for Outstanding Performance by a Male Actor in a Drama Series. Season 6 premiered on October 2, 2011. Michael C. Hall was nominated for Best Leading Actor in a Drama series at the 2011 Emmy Awards, but did not win the category. Hall was negotiating his contract along with Showtime to raise his salary for the seventh season. On November 18, 2011, it was announced that Dexter had been renewed for a seventh season which concluded December 2012, and the show was renewed for an eighth season to air June 30, 2013. After months of rumors, on April 18, 2013, Showtime announced via social media that season eight would be the final season of Dexter.