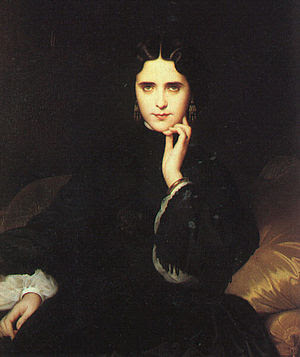 * The Comtesse de Loynes ― immortalized in this portrait by Amaury-Duval with her "penetrating gaze [which] seems to be appraising us, as we stare back" ― had Capricorn rising ruled by Saturn in Scorpio on her MC at the apex of a fixed T-square.

The famous Madame de Loynes held an influential salon in Paris beginning in 1860 until her death in 1908. . . . She [had] moved to Paris at the age of 15, where she became a part of the Paris demimonde, upper class men and women who ignored middle-class sexual values, and lived on the fringes of fashionable society. Her first significant lover introduced her to Prince Napoleon, the cousin of the Emperor Napoleon III, the ruler of the Second French Empire from 1852-70. The Prince, known as Plon-Plon, set her up in an apartment on the Champs Elysees. There she became engaged to Ernest Baroche, who held several important posts in the French government. He died in the Siege of Paris in 1870, leaving her a considerable fortune. She married the Comte Edgar de Loynes, who bestowed the title Comtesse de Loynes on her, and promptly disappeared into America. She kept his money and position, and became respectable.