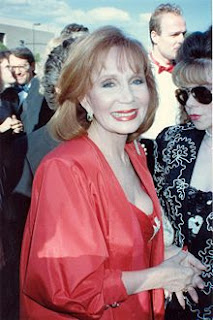 * Saturn on the Ascendant doesn't give up easily, particularly when acting as the handle of a Bucket shape carrying both luminaries and Pluto in tenacious Cancer. As Hal Erickson sums it up, Katherine Helmond "spent nearly thirty years becoming an overnight success." She worked in New York and regional theatre for two decades, making ends meet as a drama teacher, before her big break came. In 1977, aged in her late 40s, she was cast as Jessica Tate, "the scatterbrained, hedonistic matriarch" on the TV sitcom Soap, remaining with the popular series through its entire run until 1981, and earning herself a Golden Globe. Helmond then returned on the Soap spinoff Benson playing Jessica's ghost. (Even death couldn't stop her in her tracks). Helmond picked up Emmy nominations for her role as Mona Robinson, a liberated grandmother in Who's the Boss (1984-1992), and as Lois Whelan in Everybody Loves Raymond in the 2000s. Now in her 80s, she continues to work, having received acclaim for her stage performance in Eve Ensler's The Vagina Monologues.