* Jean-Baptiste Jacques Augustin painted miniatures of many famous people of his time, including Marie-Antoinette, Napoleon I and his family, and Louis XVIII, king of France.
Augustin had the Sun on his MC in creative Leo and the Moon in artistic Taurus, all closely aspected by Pluto, ruler of his Scorpio Ascendant. Pluto is the most miniature of the planets used by most astrologers, being smaller than Earth's Moon. His baptismal record has "Augustin Peintre" written in the margin (see image below). WIKIPEDIA BLURB

Jean-Baptiste Jacques Augustin (August 15, 1759 – April 13, 1832) first had some lessons from Jean-Baptiste Claudot and Jean Girardet in Nancy. After a few months in Dijon in 1780 he arrived in Paris in 1781 where he soon earned fame. During the French Revolution days he travelled to Brittany, Switzerland and Germany. Back in Paris in 1800 he married one of his pupils, Pauline Ducruet. She was 22 years younger than him and herself a painter in a similar style. In 1806 Jacques Augustin was appointed official painter to the court. Later on (1814) he became painter to the king. He died of cholera in Paris in 1832 and was buried at Père Lachaise Cemetery.

Note also the very arty Neptune in Leo on the MC at the apex of a Yod. Eris is another miniature planet increasingly used by astrologers. It is conjunct Pluto and also aspecting the luminaries and MC. 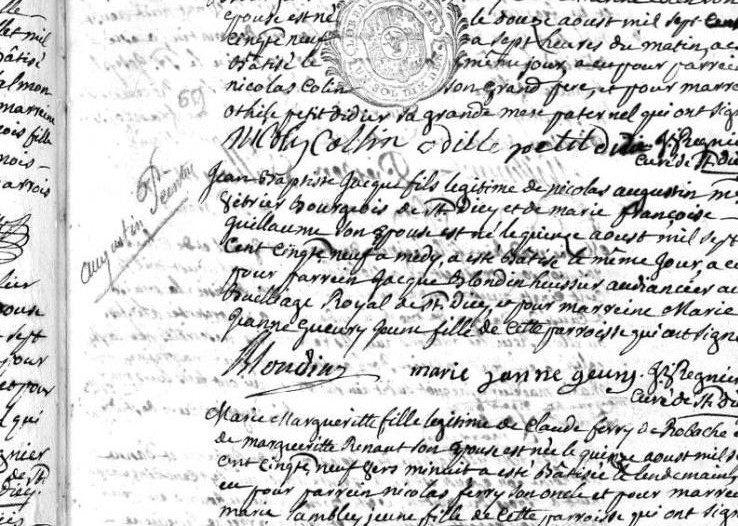