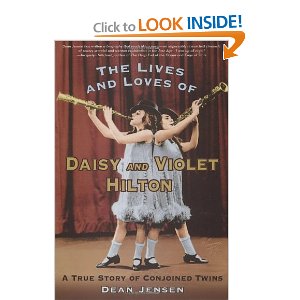 * Daisy & Violet, the conjoined Hilton sisters, had Pluto on the MC in the sign of The Twins and a Sun-Chiron conjunction in the Gemini decan of Aquarius. The Ascendant is around the last degree of Virgo quincunxed by Mercury in Pisces: unwanted by their mother, an unmarried barmaid named Kate Skinner, the sisters were brought up by her boss, Mary Hilton, who trained them to sing and dance, and toured them across the globe while privately subjecting them to abuse. The twins were exploited ruthlessly throughout much of their lives (Neptune on the North Node is ruled by Moon in Aries), but they continually struggled for their dignity and autonomy (Saturn and Pluto are angular while Uranus conjoins the South Node). WIKIPEDIA BLURB

Daisy Hilton and Violet Hilton (5 February 1908 – ?? January 1969) were a pair of conjoined twins or Siamese Twins who toured in the U.S. sideshow and vaudeville circuit in the 1930s. They were the first to be born in the United Kingdom conjoined and to survive for more than a few weeks.

The Hilton sisters toured first in Britain at the age of three as "The United Twins". Their mother Mary Hilton took them on a tour through Germany, Australia and to the USA. In true sideshow manner, their performance was accompanied by an imaginative "history". Their controllers kept all the money the sisters earned. In 1926 Bob Hope formed an act called the Dancemedians with the Hilton Sisters, who had a tap dancing routine.

When Mary died in Birmingham, Alabama, her daughter and her husband took over. They kept the twins from public view for a while and trained them in jazz music. They lived in a mansion in San Antonio, Texas until the early 1930s.

In 1931, the sisters gathered enough courage to sue their managers, gaining freedom from their contract and US$100,000 in damages. They left the sideshows and went into vaudeville as "The Hilton Sisters' Revue". Daisy dyed her hair blonde and they began to wear different outfits so they could be told apart. They had numerous affairs, failed attempts to get a marriage license and a couple of short marriages. In 1932, the twins appeared as themselves in the film Freaks. In 1951 they starred in Chained for Life, an exploitation film loosely based on their lives.

The Hiltons' last public appearance was in 1961 at a drive-in cinema in Charlotte, North Carolina. Their tour manager abandoned them there, and with no means of transportation or income, they were forced to take a job in a nearby grocery store. On 4 January 1969, after they failed to report to work, their boss called the police. The twins were found dead in their home, victims of the Hong Kong flu. According to a forensic investigation, Daisy died first; Violet died between two and four days later.

Read more from their Wikipedia biography.