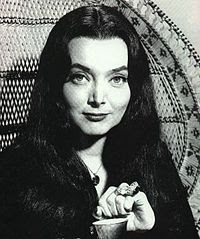 * Carolyn Jones — the beautiful actress remembered by many for her role as the sexy, sedate and sombre Morticia Addams in the mid-1960s TV series The Addams Family (seen here at left dressed in her trademark black tatters, sitting in her fan-back chair) — had her luminaries in sedentary Taurus in the 8th House trined by Saturn in Capricorn in the matriarchal 4th House. Pluto in Cancer opposes Saturn: Her name "Morticia" implies "death" (mors mortis is Latin for "death"), while Morticia's maiden name is "Frump." She has an older sister named Ophelia (also played by Jones). WIKIPEDIA BLURB

Carolyn Sue Jones (April 28, 1930 – August 3, 1983) began her film career in the early 1950s, and by the end of the decade had achieved recognition with a nomination for an Academy Award for Best Supporting Actress for The Bachelor Party (1957) and a Golden Globe Award as one of the most promising actresses of 1959. Her film career continued for another 20 years. In 1964 she began playing the role of Morticia Addams in the television series The Addams Family, receiving a Golden Globe Award nomination for her work.

Carolyn Jones as Morticia Addams in the 1960s television series, The Addams Family.