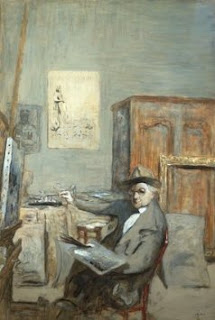 * Jean-Louis Forain ― known for his quick and often biting wit ― had Mercury conjunct the Sun in the first degree of Scorpio.

Jean-Louis Forain joined the Impressionist circle in time to take part in the fourth independent exhibition in 1879; he participated in three of the four landmark shows that followed between 1879 and 1884. Influenced by Impressionist theories on light and color, he preferred to depict scenes of everyday life: his watercolors, pastels, and paintings focused on Parisian popular entertainments and themes of modernity—the racetrack, the ballet, the comic opera, and bustling cafés.

Aside from being influenced by his friend of over fifty years, Edgar Degas, Forain was greatly influenced by Honoré Daumier; and his treatment of subjects in his drawings for publications such as Le Figaro and Le Courrier Francais are often reminiscent of Daumier's. In 1892 he published the first volume of La Comédie Parisienne, a collection of Forain's illustrations and commentary on the major political stories that disrupted France’s Third Republic—such as the anarchic crisis and the Dreyfus affair.

During the first World War, Forain's illustrations honored the patriotism of his contemporaries; and he enlisted in the Section de Camouflage under Lucien-Victor Guirand de Scévola. In his later years, Forain created numerous scenes of the Law Courts and other Parisian institutions plus social satire caricatures on late 19th and early 20th century French life. In 1931, shortly before his death, he was made a member of the Royal Academy of Arts in London. He was one of France's best known and revered artists during his time and may best be remembered for his numerous drawings chronicling and commenting on Parisian city life at the end of the 19th century.