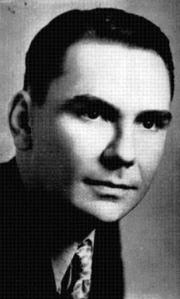 * Clifford Bias ― author of books on the Tarot and Qabalah ― had symbologist Chiron exactly on the Ascendant both in the last degree of Aquarius.

Clifford Bias was a prominent psychic in early 20th-century America. He claimed that since the age of five he had been able to communicate with people who had long since died. President Franklin D. Roosevelt counselled with him during the turbulent 1940's, as Bias was also a close friend of Roosevelt's wife, Eleanor.

Clifford Bias was ordained into the ministry in 1937 and served as a minister of churches in Jackson, Michigan; Buffalo, New York; Toledo, Ohio; St. Petersburg, Florida; and New York City. He helped organize the Spiritualist-Episcopal Church and the Universal Spiritualist Association and served as educational director and president of the Indiana Association of Spiritualists of Camp Chesterfield, Indiana. He was Dean of the Universal Spiritualist Institute, which held sessions each summer on various Mid-Western college campuses.

Clifford Bias organized a magical study group known as the Ancient Mystical Order of Seekers (A.M.O.S.) and he wrote and published a series of A.M.O.S. books, including The Probationer, L.V.X. The Book of Light, Sepher Yetzirah and the 32 Paths of Wisdom, The Neophyte, The Tarot – The Book of Thoth, The Way Back, The Western Mystery Tradition, and Qabalah, Tarot and the Western Mystery Tradition. His Ritual Book of Magic was published by Samuel Weiser in 1981. He is also featured in 'The Hierophant Of 100th Street.'

He retired in 1985 and settled in Anderson, Indiana, where he died in February 1987.