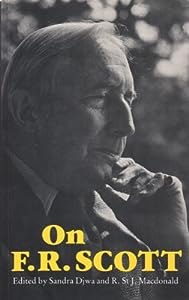 * Canadian poet F.R. Scott's father wrote in his diary that his son was born at "5:50" and that he slept that afternoon so presumably the birth happened in the morning.

Francis Reginald Scott, CC, commonly known as Frank Scott or F. R. Scott (August 1, 1899 – January 30, 1985), was a Canadian poet, intellectual and constitutional expert. He helped found the first Canadian social democratic party, the Co-operative Commonwealth Federation, and its successor, the New Democratic Party. He won Canada's top literary prize, the Governor General's Award, twice, once for poetry and once for non-fiction. He was married to artist Marian Dale Scott.

When I hear the words "poet" and "social democrat" I think "Neptune." Here Neptune is conjunct the Part of Fortune and sextile the Ascendant.

If you're enjoying these posts please consider making a donation by Paypal to help keep this blog going. Thanks.

Copyright Sy Scholfield. All rights reserved in all media.
Posted by astrodatablog at 1:39:00 pm