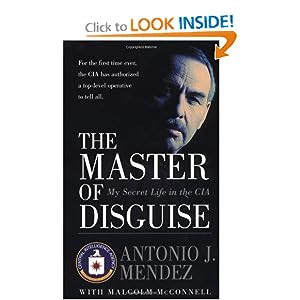 * Tony Mendez has an ideal chart for a CIA spy: a Sun-Mercury conjunction in Scorpio and Mars in the 8th (unaspected except for a wide square from Pluto — nobody will blow his cover). Mendez also has Neptune (ruler of his Pisces Ascendant) in a wedge with his luminaries: in his memoir, The Master of Disguise, Mendez reveals how he forged documents, created disguises and handled other graphical work related to espionage — cunning tricks and insights that helped save hundreds from deadly situations. He is played by Ben Affleck in the film Argo. Affleck's Pluto is conjunct Mendez's Neptune. WIKIPEDIA BLURB

Antonio Joseph "Tony" Mendez (born 1940) is an American CIA technical operations officer, now retired, who specialized in support of clandestine and covert CIA operations. He has written three memoirs about his CIA experiences.

Mendez was decorated, and is now widely known, for his on-the-scene management of the "Canadian Caper" during the Iran hostage crisis, in which he exfiltrated six American diplomats from Iran in January 1980. They posed as a Canadian film crew, and as part of their cover, the diplomats carried passports issued by the Canadian government to document them as Canadian citizens.

After declassification of records, the full details of the operation were reported in a 2007 article by Joshuah Bearman in Wired magazine. This was loosely adapted for the screenplay and development of the Best Picture Academy Award winning 2012 American film Argo, directed by Ben Affleck, who also starred as Mendez. Mendez also attended the Golden Globes to give a speech, where the film was nominated (and later won) for Best Dramatic Motion Picture.

Mendez worked as a CIA officer in South Asia, Southeast Asia and the Middle East. His work in the agency frequently dealt with forging documents, creating disguises and handling other graphical work related to espionage. He served in the CIA for 25 years. He was awarded the Intelligence Star on 12 March 1980.