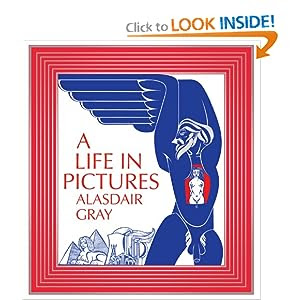 Alasdair Gray (born 28 December 1934) is a Scottish writer and artist. His most acclaimed work is his first novel Lanark, published in 1981 and written over a period of almost 30 years. It is now regarded as a classic, and was described by The Guardian as "one of the landmarks of 20th-century fiction." His novel Poor Things (1992) won the Whitbread Novel Award and the Guardian Fiction Prize. He is a Scottish and a civic nationalist (albeit one deeply critical of English immigration into Scotland) and a republican.

Gray's works combine elements of realism, fantasy, and science fiction, plus clever use of typography and his own illustrations. He has also written on politics, in support of socialism and Scottish independence, and on the history of English literature. He has been described by author Will Self as "a creative polymath with an integrated politico-philosophic vision", and as "a great writer, perhaps the greatest living in this archipelago today" and by himself as "a fat, spectacled, balding, increasingly old Glasgow pedestrian."

Scotland's best known polymath has Neptune rising in Virgo and Chiron in versatile Gemini on the MC.