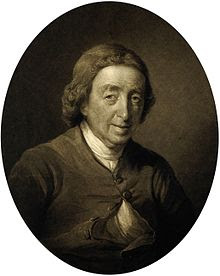 * William Emerson's father wrote in his old Prayer-book that the future mathematician "was born, Wednesday, May 14, at one o'clock in the morning and 40 minutes."

William Emerson (14 May 1701 – 20 May 1782), English mathematician, was born at Hurworth, near Darlington, where his father, Dudley Emerson, also a mathematician, taught a school. William himself had a small estate in Weardale called Castle Gate situated not far from Eastgate where he would repair to work throughout the Summer on projects as disparate as stonemasonry and watchmaking. Unsuccessful as a teacher, he devoted himself entirely to studious retirement. Possessed of remarkable energy and forthrightness of speech, Emerson published many works which are singularly free from errata.

In The Principles of Mechanics (1754) he shows a wind-powered vehicle in which the vertically-mounted propeller gives direct power to the front wheels via a system of cogs. In mechanics he never advanced a proposition which he had not previously tested in practice, nor published an invention without first proving its effects by a model. He was skilled in the science of music, the theory of sounds, and the ancient and modern scales; but he never attained any excellence as a performer. He died on 20 May 1782 at his native village, where his gravestone bears epitaphs in Latin and Hebrew.

Emerson dressed in old clothes and his manners were uncouth. He wore his shirt back to front and his legs wrapped in sacking so as not to scorch them as he sat over the fire. He declined an offer to become FRS because it would cost too much after all the expense of farthing candles he had been put to in the course of his life of study. Emerson rode regularly into Darlington on a horse like Don Quixote's, led by a hired small boy. In old age, plagued by the stone, he would alternately pray and curse, wishing his soul 'could shake off the rags of mortality without such a clitter-me-clatter.'

We expect abstract Neptune, Pisces and the 12th House to be strong in mathematicians' charts. Emerson had a Pisces Ascendant with Jupiter in Pisces in the 12th House ruled by Neptune at the apex of a T-square. His Piscean Jupiter rules the Sagittarius MC.