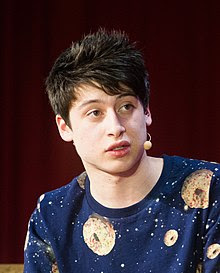 * I've found the Times birth notice for Nick D'Aloisio, the British-Australian entrepreneur, computer programmer and designer who has become known for the creation of Summly and its technology. No birth time yet, sorry.

Nick D'Aloisio has been recognised as the youngest person to receive a round of venture capital in technology at just 15 years of age. D'Aloisio's business partners include Li Ka-Shing, Rupert Murdoch, Ashton Kutcher, Stephen Fry, Yoko Ono and Mark Pincus, among others.

D'Aloisio grew up in London, United Kingdom, attending King's College School, in Wimbledon where he received an Academic Scholarship. D'Aloisio received his first computer at 9 and used it to create movies with editing tools such as Final Cut Pro. D'Aloisio began writing apps at the age of 12 in 2008. He is still based in London. His mother Diana D'Aloisio is a lawyer and his father works in commodities.

D'Aloisio was born in Australia in 1996, with his parents Diana and Lou. He lived in both Melbourne and Perth. D'Aloisio created the Trimit application for iOS in March 2011, which used an analytical tool to condense text content into 1000, 500, or 140-character summary text. The app caught the attention of Apple who featured Trimit as a new and noteworthy application on the App Store in July 2011. The potential of Trimit attracted the attention of Hong Kong based billionaire Li Ka-shing, who provided D'Alosio with US$300,000 in venture capital funding. D'Alosio used the feedback and criticism from Trimit to completely re-design the application, and re-launched it in December 2011, as Summly. As of March 2013 Summly was sold to Yahoo for a reported $30 million US dollars.

Summly aimed to solve perceived problems with the way news articles are presented on smartphones, with initial version of Summly being downloaded by over 200,000 users. As a result of the corporate support, in November, 2012, D'Alosio received US$1,000,000 in new venture funding for Summly from several international celebrities such as Yoko Ono, Ashton Kutcher and Stephen Fry, in addition to Hong Kong business mogul Li Ka-shing.

This "teen app wizard" is one of the Pluto-in-Scorpio generation with his Pluto in the last degree of Scorpio conjunct Mars in Sagittarius (venture-) and Venus in Scorpio (-capital, funding).

These blog posts and emails are for private recipients only. If it comes to your attention that these posts are being transferred to public media such as a mailing list please notify us. Thankyou.