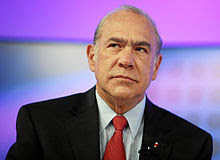 * Ángel Gurría is the current Secretary-General of the Organisation for Economic Co-operation and Development (OECD) since 1 June 2006.

Gurría served as the Mexican Secretary of Foreign Affairs (1994–1997) and as Secretary of Finance (1998–2000) in the Ernesto Zedillo administration. In Foreign Affairs he opposed the Helms-Burton Act and while serving in Treasury, he restructured the foreign debt. He also negotiated the North American Free Trade Agreement (NAFTA) and requested financial aid during the 1994 crisis.

He was the architect of the Mexican economic stabilization, partially by cutting government spending six times during the Zedillo administration. The effect of his work has been felt during Vicente Fox's administration who nominated him to lead the OECD in July 2005.