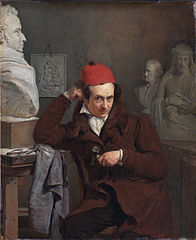 * During his lifetime Louis Royer (AKA Lodewyk Royer) was the most important sculptor in the Netherlands. He was known as the "Canova of the Netherlands" and later was simply referred to as "the sculptor."

In 1823, Royer was the first sculptor to win the Dutch version of the Dutch Prix de Rome, which allowed him to study in Rome where he came under classicist influences. He gained a lot of admiration for his portrait of Pope Leo XII, whom he portrayed from life.

In 1827, he returned from Rome and settled in The Hague, an important artistic centre after the royal family had moved there from Amsterdam. He was soon appointed court sculptor and he made portraits of all members of the royal family in busts of marble. Shortly afterwards he was also appointed director of the Royal Academy of Art in Amsterdam.

After moving to Amsterdam in 1837, Royer received many public commissions for statues of leading personalities from Dutch history, such as the statues of Rembrandt and Joost van den Vondel in Amsterdam, William the Silent in The Hague and Michiel de Ruyter in Vlissingen.

Translation: "The most consulted art history books frequently discuss his birth. He was born in Mechelen on the 1st of August 1793 at 10 o'clock in the evening."