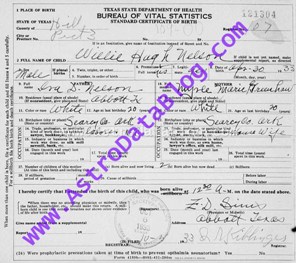 * For the last three decades, Willie Nelson's time of birth has been quoted as 12:30 p.m. (16° Leo rising) from Michel and Francoise Gauquelin's The Gauquelin Book of American Charts (1982), but according to his birth certificate (which I have published today) he was born at 12:30 a.m. (22° Capricorn rising) on 30 April 1933. The certificate was filed on 6 October 1933 — over five months after his birth — filled out and signed by doctor F. D. Sims.

Nelson's wife and cousin (who attended his birth) have both stated that Willie was born just before midnight on the 29th. Nelson has also stated "April 29, 1933" as his birthday. And reportedly, Willie's family "party BOTH days simply because we can."

All information thus points to a birth time of around midnight between the 29th and the 30th which narrows his Ascendant down to between around 12°-22° Capricorn, with either Moon or Pluto, or both, conjunct his Descendant (7th House cusp).

See the charts, data, sources and certificate by clicking here.