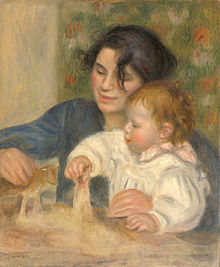 * In this painting by Auguste Renoir, Gabrielle Renard plays with his son Jean. As both nanny and artist's model, Renard here embodies her Venus in Cancer - which rises in her chart and conjuncts the horizon of Jean Renoir's chart. Gabrielle and Jean not only shared the same Ascendant sign, they shared a lifelong bond. Her Moon is on his IC: their bond was nurtured by her loving influence over him. She took the young Jean to see his first movie. One day he would become an acclaimed filmmaker.

See their data and charts below.

Gabrielle Renard (August 1, 1878 – February 26, 1959) was a French woman who became an important member of the family of the painter Pierre-Auguste Renoir, first becoming a nanny and subsequently, a frequent model for the artist. Upon her marriage in 1921 she became Gabrielle Renard-Slade.

Born in Essoyes in the Aube departement of France, she was a cousin of Aline Victorine Charigot Renoir, who had married the painter, Pierre-Auguste. The village was the birthplace of Aline also. At age sixteen, Gabrielle Renard moved to Montmartre to live and work as a nanny in her cousin's household, where the second of the three Renoir sons was about to be born. Renard became the subject of a number of Renoir's portraits, many of her with the children.

Gabrielle Renard developed a strong bond with the infant, Jean Renoir, that would last throughout their lives. She introduced him to the Guignol puppet shows that were held in the Montmartre. Gabrielle was fascinated by the new motion picture invention and when Jean Renoir was only a few years old, Gabrielle took him to see his first film. He became a renowned film maker.

If you're enjoying these posts please consider making a donation by Paypal. Thanks.
Gabrielle Renard's natal chart