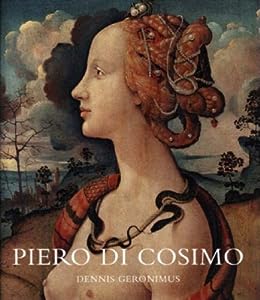 * Piero di Cosimo had five planets and his Ascendant in Aquarius. No wonder, then, that he acquired a reputation for eccentricity during his lifetime.

Piero di Cosimo (2 January 1462 – 12 April 1522), also known as Piero di Lorenzo, was born in Florence and apprenticed under the artist Cosimo Rosseli, from whom he derived his popular name and whom he assisted in the painting of the Sistine Chapel in 1481.

In the first phase of his career, Piero was influenced by the Netherlandish naturalism of Hugo van der Goes, whose Portinari Triptych (now at the Uffizi Gallery in Florence) helped to lead the whole of Florentine painting into new channels. From him, most probably, Cosimo acquired the love of landscape and the intimate knowledge of the growth of flowers and of animal life.

He journeyed to Rome in 1482 with his master, Rosselli. He proved himself a true child of the Renaissance by depicting subjects of Classical mythology in such pictures as the Venus, Mars, and Cupid, The Death of Procris, the Perseus and Andromeda series, at the Uffizi, and many others. Inspired to the Vitruvius' account of the evolution of man, Piero's mythical compositions show the bizarre presence of hybrid forms of men and animals, or the man learning to use fire and tools.

During his lifetime, Cosimo acquired a reputation for eccentricity. Reportedly, he was frightened of thunderstorms, and so pyrophobic that he rarely cooked his food; he lived largely on hard-boiled eggs, which he prepared 50 at a time while boiling glue for his artworks. He also resisted any cleaning of his studio, or trimming of the fruit trees of his orchard; he lived, wrote Vasari, "more like a beast than a man".

Piero enjoyed a great reputation as a portrait painter: the most famous of his work is in fact the portrait of a Florentine noblewoman, Simonetta Vespucci, mistress of Giuliano de' Medici.

His Aquarian stellium was ruled by Uranus in Virgo, signalling his pyrophobia and weird dietary obsessions.

BIRTH DATA: Piero di Lorenzo di Piero, 2 January 1462 [OS], 09:00 (9 a.m.) LMT (-0:45), Florence, Italy (43n46, 11e15). ASC: 17 Aquarius. RR: AA (from quoted birth records). SOURCE: Sy Scholfield (c) quotes Dennis Geronimus's article, "The birth date, ealy life, and career of Piero di Cosimo" (The Art Bulletin, New York: March 2000. Vol. 82, Iss. 1; pg. 164, 7 pgs): "A new database of Florentine baptismal records, currently being compiled by Karl Schlebusch and Anne Schleicher, provided a list of all males born and baptized as Piero di Lorenzo in Florence between 1450 and 1470, allowing the discovery of a new document specifically recording that Piero di Lorenzo di Piero, of the parish of S. Lorenzo, was born at fifteen hours after sundown (approximately nine in the morning) on January 2, 1462, and baptized on the same day. ... The Italian hours are explained briefly in E. H. Ramsden, The Letters of Michelangelo, vol. 1 (London: Peter Owen, 1963). Sunset marked the beginning of the day, meaning that the first hour varied from day to day; the same hour, therefore, represented a different time in each of the seasons. In the case of Piero's birth, fifteen hours (after sunset) in January would be equivalent to roughly nine in the morning."