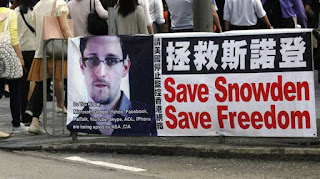 * Edward Snowden ― the source behind the biggest intelligence leak in the National Security Agency's history ― has eight planets in two wedge patterns, one involving a close Pluto-Saturn conjunction. In AstroCartoGraphy, his 'Ceres IC' line runs by Hong Kong, where he has taken temporary refuge. Will his actions drive a wedge between the USA and the UK? And between the USA and China?

Edward Joseph Snowden (born June 21, 1983) is an American former technical contractor and Central Intelligence Agency (CIA) employee who worked as a contractor for the National Security Agency (NSA), before leaking details of classified NSA mass surveillance programs to the press. Snowden shared classified material on a variety of top-secret NSA programs, including the interception of U.S. telephone metadata and the PRISM surveillance program, primarily with The Guardian, which published a series of exposés based on Snowden's disclosures in June 2013. Snowden said his disclosure of PRISM and FISA orders related to NSA data capture efforts was an effort "to inform the public as to that which is done in their name and that which is done against them."

Mars in Gemini suggests a whistleblower, particularly when opposed by Neptune, conjunct the Sun in the last degree of Gemini, and trined by a Pluto-Saturn conjunction.