* For the last three decades, Willie Nelson's time of birth has been quoted as 12:30 p.m. (16° Leo rising) from Michel and Francoise Gauquelin's The Gauquelin Book of American Charts (1982), but according to his birth certificate (which I have published below) he was born at 12:30 a.m. (22° Capricorn rising) on 30 April 1933. The certificate was filed on 6 October 1933 — over five months after his birth — filled out and signed by doctor F. D. Sims. Nelson's wife and cousin (who attended his birth) have both stated that Willie was born just before midnight on the 29th. Nelson has also stated "April 29, 1933" as his birthday. And reportedly, Willie's family "party BOTH days simply because we can." All information thus points to a birth time of around midnight between the 29th and the 30th which narrows his Ascendant down to between around 12°-22° Capricorn, with either Moon or Pluto, or both, conjunct his Descendant (7th House cusp). See the charts, data, sources and certificate below. WIKIPEDIA BLURB

Willie Hugh Nelson is an American country music singer-songwriter, as well as an author, poet, actor, and activist. The critical success of the album Shotgun Willie (1973), combined with the critical and commercial success of Red Headed Stranger (1975) and Stardust (1978), made Nelson one of the most recognized artists in country music. He was one of the main figures of outlaw country, a subgenre of country music that developed at the end of the 1960s as a reaction to the conservative restrictions of the Nashville sound. Nelson has acted in over 30 films, co-authored several books, and has been involved in activism for the use of biofuels and the legalization of marijuana.

NATAL DATA, ASTROLOGY CHARTS, BIRTH CERTIFICATE If you're enjoying these posts please consider making a donation by Paypal towards the upkeep of this blog and the further acquisition of birth data. Thanks. CHART A (from cousin's memory)

BIRTH DATA: Willie Hugh Nelson, 29 April 1933, about 23:55 (11:55 p.m.) CST (+6), Abbott, Texas, USA (31n53, 97w04). ASC: about 13 Capricorn. RR: A (from his cousin's memory). SOURCE: Sy Scholfield (c) quotes Nelson in his autobiography, Willie (Cooper Square Press, 2000), p. 24, "Dr. Sims and his wife lived in this house in 1933, and on an April night of that year Doc was fetched by my cousin Mildred to tromp across the field to the little frame house where my mother, Myrtle, was laboring to present the world with a new old soul--me." Mildred states in an interview, "What's all this about your birthday being on the 30th? I was there. You were born the night of the 29th, right before midnight. I remember looking at the clock. The doctor may not have looked at the clock until several minutes later, logging in the date as after midnight, but you were definitely born on the 29th" ("Country Clips," Mirror 19 May 2005, p. 6). In a recent interview, Amy Goodman quotes Nelson for a birthday of "April 29, 1933," adding, "Music legend Willie Nelson turns 80 today. A lot of websites say it’s the 30th, tomorrow, but we talked to his wife Annie; she said he was born just before midnight, the doctor recorded it after midnight, so legally it’s the 30th, but really it’s the 29th" (Amy Goodman, "Country Musician Willie Nelson Turns 80: 'One Person Carrying a Message Can Change the World,'" Democracy Now! 29 April 2013 <http://www.democracynow.org/2013/4/29/country_musician_willie_nelson_turns_80>.).

CHART B (from birth certificate) 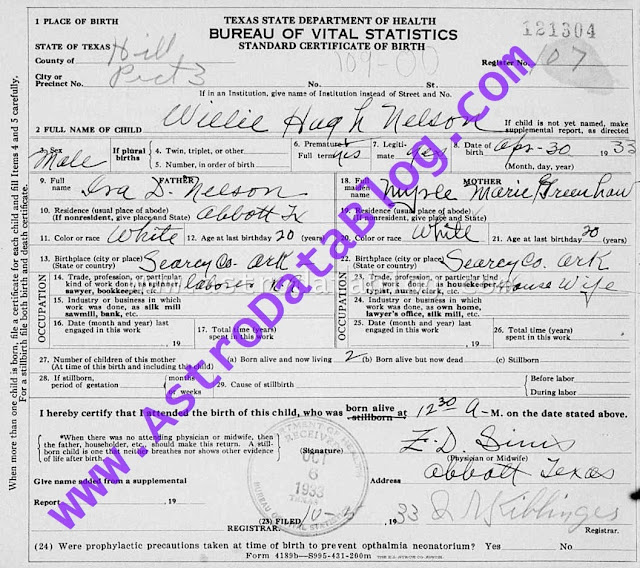