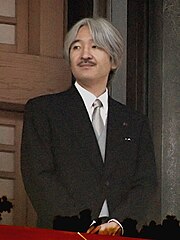 * Prince Fumihito is the second son of Emperor Akihito and Empress Michiko and currently second in line to the Chrysanthemum Throne. Since his marriage to Kiko Kawashima on 29 June 1990, he has held the title of Akishino-no-miya (generally translated into English as Prince Akishino) and headed his own branch of the imperial family. Prince and Princess Akishino have two daughters and one son. Prince Fumihito received a PhD degree in ornithology from the Graduate University for Advanced Studies in October 1996. He conducted field research in Indonesia in 1993 and 1994, in Yunnan Province in the People's Republic of China. When the current Emperor was still Crown Prince, he introduced tilapia to Thailand as an important source of protein. Tilapia can be easily cultured and Prince Fumihito, who is also known as "catfish specialist," has managed to maintain and expand the aquacultural studies with the people of Thailand. He is a big fan of the Beatles and an avid tennis player. NATAL DATA and ASTROLOGY CHART