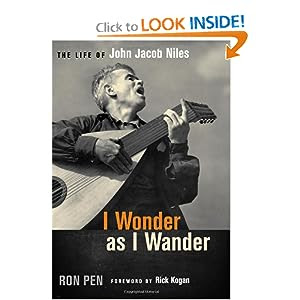 * John Jacob Niles - called the "Dean of American Balladeers" - often accompanied himself on an Appalachian dulcimer, lute, or other plucked stringed instrument. He had both luminaries in vocalist Taurus in the airy 3rd House, ruled by plucky Venus in Gemini. "I Wonder As I Wander" is the title of one of his signature songs and of his biography. In his chart, Jupiter-the-wanderer (ruler of his Sagittarius MC) was unaspected except for a sextile to Neptune-the-wonderer which rules his Pisces Ascendant. WIKIPEDIA BLURB

John Jacob Niles (April 28, 1892 — March 1, 1980) was an American composer, singer, and collector of traditional ballads. Niles was an important influence on the American folk music revival of the 1950s and 1960s, with Joan Baez, Burl Ives, and Peter, Paul and Mary, among others, recording his songs.