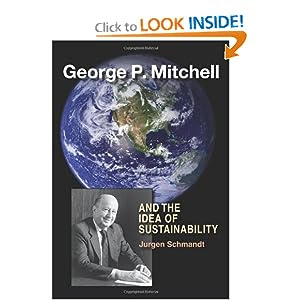 * George P. Mitchell — credited with pioneering the "fracking" business — died on Friday, aged 94, of natural causes. Fracking involves extracting natural gas from shale rock formations in the ground by fracturing it with pressurized liquid, and it has proved very controversial due to its environmental impacts. Mitchell innovated the process called "slick-water fracturing" which has enabled fracked gas to become the fastest growing contributor to total primary energy (TPE) in the USA. In his chart, Mitchell had the first degree of the polemical Scorpio decan of Pisces on his Ascendant, ruled by gassy-watery Neptune opposite his Moon in a T-square to Mercury in Taurus. Another T-square has a Saturn-Uranus opposition with a Mars-Sun conjunction at its apex in earthy Taurus. The "father of fracking" had the paternal Sun in the final degree of the rock-hard Capricorn decan of the Fixed Earth sign. Venus (ruler of his stressed Taurus planets) is conjunct Pluto, Jupiter and the Part of Fortune, all in Cancer in the 4th House, closely conjunct the Venus-Jupiter-Sun stellium in the chart of the USA. WIKIPEDIA BLURB

George Phydias Mitchell (May 21, 1919 – July 26, 2013) was an American businessman, real estate developer and philanthropist from Texas credited with pioneering the economic extraction of shale gas.

He started an independent oil and gas company, Mitchell Energy & Development Corp. and built it into a Fortune 500 company. He participated in the development of about 10,000 wells, including more than 1000 wildcat wells.

In the 1980s and 1990s, the company pioneered new technology[clarification needed] for horizontal drilling of natural gas. This technique, combined with hydraulic fracturing of rock, makes it possible to economically extract natural gas from shale rock formations. The new approach has been widely adopted by the gas industry and spawned a new gas boom in North America.

In 2004, Forbes magazine estimated his net worth as $1.6 billion, placing him among the 500 richest people worldwide. He has signed The Giving Pledge (making a commitment to give most of his wealth to philanthropic causes).